The UK’s most exciting mind-reader who can’t read minds, Chris Cox is renowned for his incredible ability to predict the unpredictable. The award winning, Edinburgh Fringe sell out and self proclaimed mind-reader who can’t read minds. Chris Cox will perform his 2009 Edinburgh show Mind Over Patter, a selection of previously unseen feats to frazzle your brains. Off the back of a successful UK tour Chris Cox will astound, astonish and make you say the ‘wow’ word with his mongrel hybrid mix of mind reading related nonsense.

Unleashing the dormant mind-reader in every audience member, Chris envisions a perfect world where the mundane can be magical, getting a seat on the train is always assured, the objects of your desire always find you irresistible – and even winning the lottery could be a possibility.

Breathtakingly accurate, his predictions are a mongrel hybrid mix of psychology, reading signals, human control, the disarming power of comedy and lucky guesswork. He constantly astonishes audiences with cutting-edge and highly imaginative stunts, charmingly delivered with a warm and mischievous sense of fun. 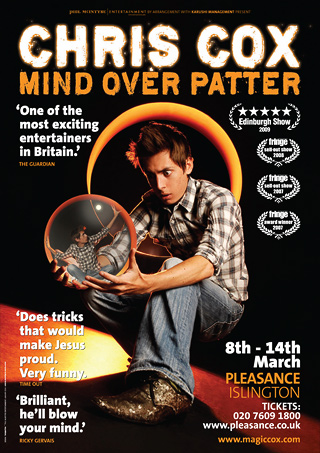