BBC Radio 1’s resident magician takes magic into the new world of technology. His props are the stuff of the 21st century – no magic wand, no fez – but he does have big feet.

This is a completely unique and new form of mind reading. – even though he says he can’t read minds! A fully interactive – and funny – multi-media theatrical experience, it’s also funny – encompassing (funny) mind reading, (funny) magic, psychology and comedy (the comedy’s not too hot but everything else is funny).

This 22-year-old has an impressive track record. He has already baffled and delighted BBC Radio 1 audiences with his performances.

Chris has been performing for more than 12 years and recently has been exposed to a national audience having featured on Radio 1, BBC 3, BBC 7 and in the Metro newspaper.

It’s all set up in advance with an audience full of stooges who come prepared to make Chris Cox look like the bastard child of Uri Geller and Derren Brown. Anyone who can really do what Mr Cox insists he can do should be burned at the stake or at the very least poached in warm water until he gives up his unholy secrets. The fact is he can’t read minds – no one can, except for that bloke up our road who wears his wife’s dentures. He’s been reading people’s minds for years and stealing knickers off their washing lines. Perhaps he taught Chris Cox – Oh My God – perhaps Cox CAN reads minds and he’s just trying to put us off the scent. Now that WOULD be a show worth seeing. 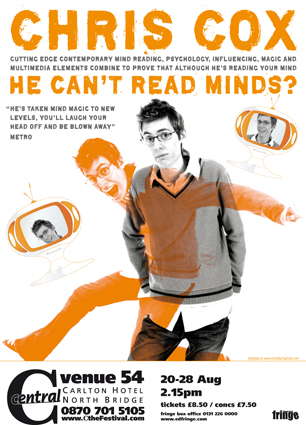