Everything Happens For A Reason is Chris’ 5 star, award winning sell out show which premiered at The Gilded Ballon on the 1st August 2008. It had a 27 day run in Edinburgh before a small UK tour and one-off West End show in London.

The earth goes round the Sun, the Sun still prints photos of topless models, you can’t change the laws of the universe – or can you? BBC Radio 1’s resident magician (or ‘Wizzard’) Chris ‘the magician’ Cox fuses magic, mind-reading, psychology & comedy to create a show like no other. You never know, he just might take control of YOUR life.

EVERYTHING HAPPENS FOR A REASON is a comedy-fuelled, interactive, theatrical experience utilising cutting-edge magic, multimedia technology and youthful showmanship, energy and flair, with not a wand, fez, saw or crystal ball in sight. In EVERYTHING HAPPENS FOR A REASON, Chris ‘The Magician’ Cox of BBC Radio 1’s Chris Moyles’ Breakfast Show, will delve deeper into the minds of the audience. Through subliminal messaging, subtle suggestion, illusion and psychology, Chris performs a series of individual mind-tricks as he takes the audience on a path to their own grand finale that Chris will have predicted – and if he didn’t, then perhaps he wasn’t meant to, the show will finish a couple of minutes early and who knows where those extra minutes will lead; To the purchase of a winning lottery ticket? To the middle of the road at the wrong time, only to be struck down by a bus? Meeting a soul-mate through a chance encounter as you leave the venue early? And, should that happen, will it have been influenced by Chris suggesting it might? 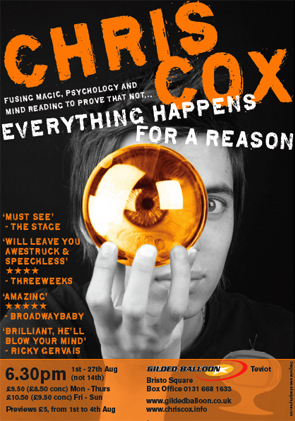