You think you have free will? You think you can decide what you choose? You think fate can’t be changed? You need to think again! 24 year old Chris Cox will change the way you think! After selling out his entire run and winning the Zebra Award at the 2007 Edinburgh Festival – the mind reader who can’t read minds is back reading minds with a new 18 date UK tour entitled ‘Control Freak’ which kicks off in Crawley on the 5th October.

‘Control Freak’ focuses on our ability to control those around us, through a mix of magic, psychology, neuro-linguistics programming, reading body language, subliminal messaging, influencing, devilish good looks and lying. It combines his award winning show ‘Everything Happens For A Reason’, with this years highly acclaimed sell out Edinburgh Fringe show ‘Control Freak’ in funny, entertaining, jaw-dropping and cutting edge fashion leaving you laughing, thinking and rubbing your chin in a slightly curious fashion.

By removing the audience’s free will and controlling them without them knowing it, he attempts to prove that he can make it look like he can read their minds! Chris will be looking at the ‘what if’ moments in life, seeing if everything happens for a reason and trying to work out how all those little things about our lives add up to turn us into the person we are. It all comes together in a stunning finale that proves Chris has been in control throughout and will leave the audience in no-doubt that he is as much of a geek as he is a control freak.

With celebrity fans including Ricky Gervais, Dannii Minogue and Kelly Osbourne, ‘Control Freak’ is a show not to be missed! Audience participation is crucial!!! 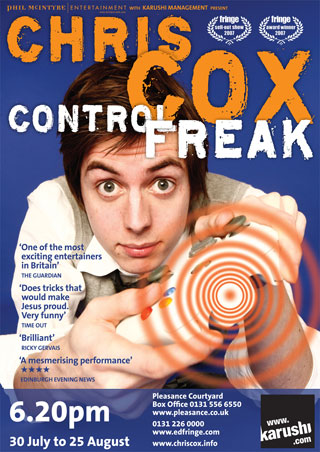