Chris will be bringing his unique, fun, hilarious and mind-blowing mind-reading to Sydney Opera House over Christmas 2018 after starting the tour in Canberra Theatre Centre. He’ll then be going on to QPAC in Brisbane before one final Australia Location.

This completely new, mind-blowing spectacular showcases the jaw-dropping talents of eight of the most incredible illusionists on earth. THE ILLUSIONISTS – DIRECT FROM BROADWAY has shattered box office records across the globe and dazzles audiences of all ages with a powerful mix of the most outrageous and astonishing acts ever to be seen on stage. The non-stop show is packed with thrilling and sophisticated magic of unprecedented proportions.

The group of world class performers takes their cue from the showmanship of the great illusionists of the past such as Harry Houdini and pair it with a new and updated contemporary aesthetic, who set and costumes design lend the genre theatricality and artistry that has rarely been seen before.

Collectively these performers have been seen by millions of people around the world and this production showcases their incredible talents together on stage.

You can find out more about Chris in The Illusionists here

Chris has been incredibly busy this summer filming his brand new CBBC show Chris Cox’s Mind Boggling Magic. As soon as we know when you can see it, you’ll be the first to know! 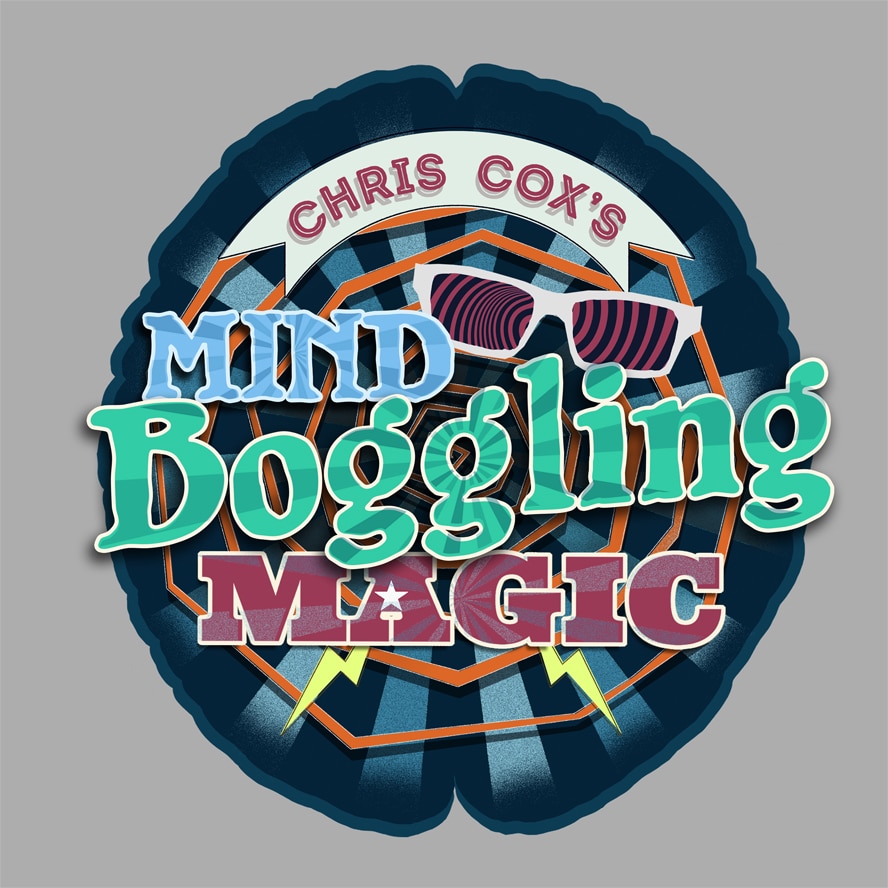 Chris is delighted to announce that he will be continuing to blow minds with the worlds biggest and most successful magic show, The Illusionists as part of their 2018 Autumn US Tour. Check out all the dates over here. It’s time for America to LOVE COX! 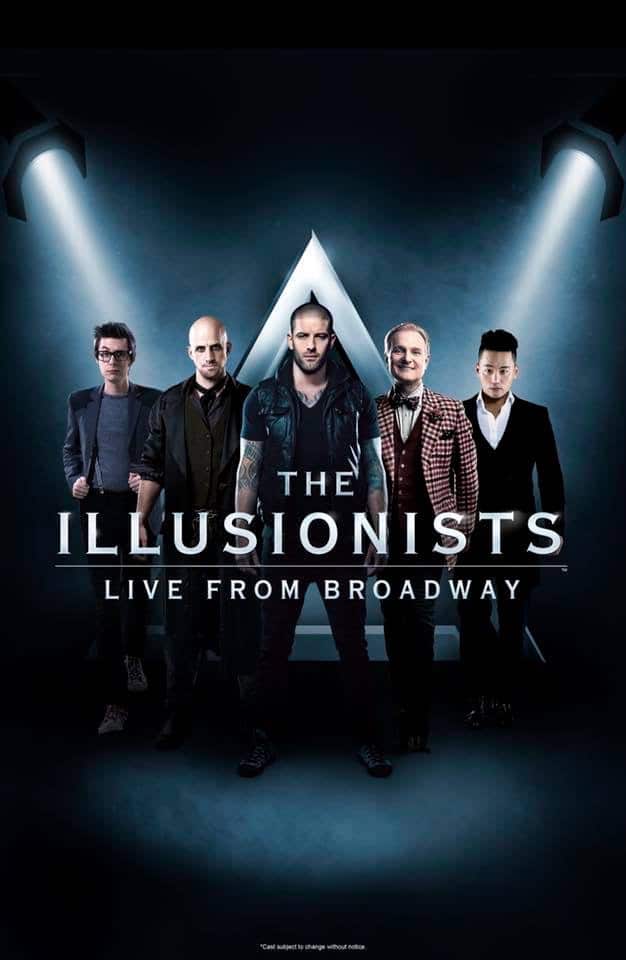 Chris is over the moon to have joined the 2018 company of Harry Potter And The Cursed Child Parts One and Two at the Palace Theatre in London’s West End. Chris is the new magic & illusions assistant on the multi Olivier Award winning production of J.K. Rowling, John Tiffany & Jack Thorne’s theatrical masterpiece.

Great news to start 2018, especially if you’re in South Africa and a fan of Chris Cox. He will be starring in ‘The Illusionists – Direct From Broadway’ in Cape Town and Johannesburg in Feb and March 2018. Find out more below or by clicking here. 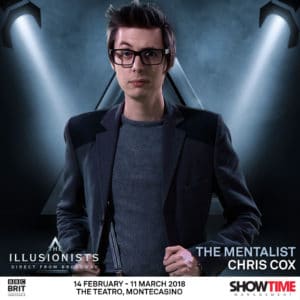 The Illusionists Direct from Broadway

After record breaking runs in New York, London and Asia, The Illusionists Direct from Broadway will be in South Africa for the first time ever, opening at GrandWest on Wednesday, 07 February 2018 for a limited season ending on Sunday, 11 February 2018. The show then moves to Montecasino’s Teatro from Valentine’s Day, Wednesday, 14 February to Sunday, 11 March 2018.

“The Illusionists” has shattered box office records across the globe and continues to dazzle audiences of all ages with a powerful mix of the most outrageous and astonishing acts ever to be seen on stage. The show is packed with thrilling and sophisticated magic of unprecedented proportions. Witness stunning acts of grand illusion, levitation, mindreading, and disappearance in this mind-blowing spectacular that showcases the jaw dropping talents of eight of the most incredible Illusionists including Chris Cox as the The Mentalist. A self-proclaimed “mind reader who can’t read minds”. He is making a big name for himself at home in the United Kingdom and soon in South Africa as a funny, confident and charismatic performer; full of energy, warmth and charm. Chris delivers incredible mind-reading stunts with a silly and mischievous sense of fun that leaves audiences astounded, amazed and thoroughly entertained.

Also appearing in the show is award winning New York comedian, Harrison Greenbaum, The Trickster who co-hosted and performed at the official Times Square New Year’s Eve World Wide Webcast in 2010 and 2011 live broadcast to over 250 million viewers around the globe.

Infusing the old and new world of performance theatre in his magical illusion act, The Escapist, Krendl has performed over 1,200 shows in 12 years and was voted ‘best in show’ for the past 3 years at the international Magic Theater. He has been featured on national television shows and performed on cruise ships and at resorts around the world.

Ben Blaque, The Weapon Master established himself as America’s foremost master of the crossbow after appearing 4 times on America’s Got Talent. His Danger Act made it to the quarterfinals and was then brought back by Howard Stern for the Wild Card Show. Ben performs incredibly dangerous acts using highly powerful crossbows to shoot various objects. His acts are as thrilling and action-packed as they are entertaining and are sure to leave you on the edge of your seat.

Combining a truly entrancing, poetic approach to card trickery with brilliant dexterity, Korean-born Den Den, The Manipulator’s ‘now you see it, now you don’t’ trickery keeps audiences utterly engrossed, mixing visually beautiful performance with mind bending magic. This master of manipulation was named Magician of the Year in 2014 by the Academy of Magical Arts and he received the highest accolade from the Society of American Magicians. His award-winning act has marked him as one of the best in the world of manipulation!

Kalin & Jinger are no strangers to South Africa, having previously performed at Sun City. Mark Kalin, The Showman is one of the most influential magicians of the last decade, bringing his amazing illusions to the stage and on television shows as well as his own experimental theatre in Reno, Nevada. As a young man Mark’s specialty was sleight-of-hand magic, but he later expanded his act, with Jinger Leigh, The Conjuress to include tigers, panthers and sensational, split-second marvels. They even presented the largest stage illusion of all time, vanishing an American Airlines jumbo jet at the Reno Hilton. Working together as Kalin & Jinger, the duo has developed a reputation for their mix of innovative illusions and their distinctive, modern style. They were awarded Magicians of the Year from The Academy of Magical Arts (The Magic Castle), the highest honor in magic, recognizing their unique achievements and charismatic performances A modern sorceress in a very ancient art, Jinger Leigh’s unique blend of elegance and theatricality has redefined the role of the magician.

As a performance artist and modern interpreter of the art of illusion, Darcy Oakes, The Grand Illusionist transports audiences with his charm, his sleight of hand and logic-defying illusions. He has taken the rich heritage of the magic culture and put a fresh, young and modern twist on the profession. In 2014 Darcy made an appearance before 200 million viewers on ITV’s Britain’s Got Talent. He impressed both the judges and the audience, catapulting this star much higher than even he had believed possible. In 2016, he made a guest appearance on America’s Got Talent proving once again that the impossible is possible.

It’s not an illusion, tickets are selling fast. Book now at Computicket by calling 0861 915 8000, visit www.computicket.com or your nearest Computicket service centre. For further information visit www.showtime.co.za or www.montecasino.co.za or www.grandwest.co.za Special hospitality packages as well as Show & Stay packages available from Montecasino Hospitality & Corporate Events, (011) 3674250 or montecasino.reservations@tsogosun.com. Stay current on the latest news through social media on Facebook Twitter and YouTube.