Chris is delighted to announce a one-off final performance of his 5 star, award winning show Mind Over Patter, you know, the one that wowed Edinburgh & New Zealand.

He’ll be performing it in the Udderbelly at the Southbank Centre in London on the 12th May at 9pm. You can find out more about the show and buy tickets here or here. Don’t forget to sign up to the facebook group here and confirm your attendance here. That’s a lot of places for you to visit. Lucky people that you are.

Here’s the official chitchat on it…

The UK’s most exciting mind-reader who can’t read minds Chris Cox is renowned for his incredible ability to predict the unpredictable. After 4 years of award winning sell out runs at the Edinburgh Fringe, performances at the New Zealand International Comedy Festival & UK tours Chris will make the impossible possible in his 5 star show that’ll astound and astonish with his mongrel hybrid mix of mind reading related nonsense.

Unleashing the dormant mind-reader in every audience member, Chris envisions a perfect world where the mundane can be magical, getting a seat on the train is always assured, the objects of your desire always find you irresistible – and even winning the lottery could be a possibility.

Breathtakingly accurate, his predictions are a mongrel hybrid mix of psychology, reading signals, human control, the disarming power of comedy and lucky guesswork. He constantly astonishes audiences with cutting-edge and highly imaginative stunts, charmingly delivered with a warm and mischievous sense of fun. 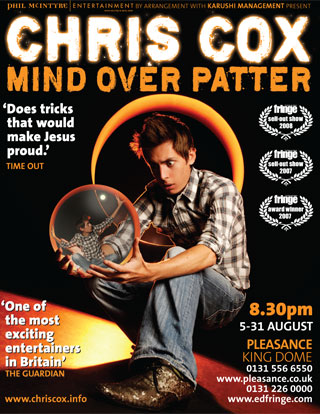