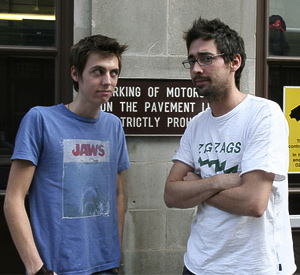 I met Colin three years ago at Glastonbury. After that, I went to stay at his flat in London. We used to play Monopoly, which turned into a bit of a joke – he made up his own rules on buying and selling houses and in the end I had to let him win.

As well as working together quite a lot, we shared a flat for just under two years – I moved out a month ago as he is now engaged. He wasn’t the tidiest landlord. All his unread post would stack up in the hall and every now and then we’d get a phone call saying our gas was about to be cut off.

Because I was getting up very early to do the Chris Moyles show and Colin’s Radio 1 show was on in the evenings, we didn’t see much of each other. He used to come in after his show and watch Countdown at 1am and play along – he even had a little book to keep note of his score. It was his way of winding down.

When time allowed we’d go out drinking, but normally we’d just sit in and watch telly – we’re both massive fans of The Simpsons.

I have divulged a lot of my magic tricks to Colin, but I trust him not to tell anyone. He has been a massive support to me. His knowledge of music is phenomenal. He got me into Flaming Lips and Spinal Tap, among other things. I love The Killers, Rufus Wainwright and The Bare Naked Ladies. Colin hates The Bare Naked Ladies so I stuck a load of their tracks in a documentary I made for his show about stand-up. He was not amused.

We both have aspirations to be like Larry David, which he kind of gets away with – I’m quieter than him and he’s probably more comfortable in front of a big group of people. 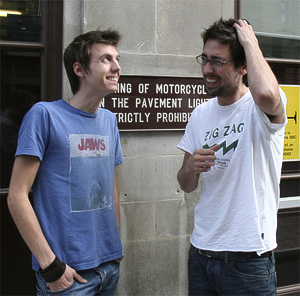 CHRIS is great at his job, which is a prerequisite for getting on with me. For the first year we worked together he got quite annoyed because I would just bully him into doing tricks on the show that he didn’t want to do.

During our single days, he’d use his magic to chat up girls, especially his mind-reading techniques. I thought they were the worst chat-up lines in the world, but somehow they worked. He’d never miss an opportunity.

Chris was a dream flatmate. He also runs a consumer review website, so he’s great at blagging stuff – he sorted my flat out with free Sky television and wi-fi. But it was bad when he would cook up some vegetarian bean monstrosity and stink out the house.

Chris is very slight of frame – he’s got the bone density of a miniature pony – and he went through a period of doing weights and sit-ups. He’d walk about the house with no top on and be doing press-ups behind the sofa while I was trying to watch The Simpsons, but the body mass just wasn’t there. He’s now using the skinny-boy thing to his advantage, which is good. He is very effeminate – I don’t know where he gets that from, because his dad is a pie-eating football fan, a real man’s man – but he’s got a nice girlfriend now. She’s a children’s entertainer. He spent a weekend recently staying where she works. She was dressed as Fireman Sam for a kids’ party and I think they got it on while she was in costume.

I know the secrets behind a lot of Chris’s tricks, but there are some that I just can’t work out. He’s very talented – one of the best in the business – and his show is good too, when he doesn’t crack too many jokes.